Agile vs. planned – and why wrong is sometimes better than right In the wonkish strategy world, there is a debate between two schools: agile and planned.

So far as I can tell planned strategies are those which involve setting out a particular position against the competition and sticking to it, whilst agile strategies are naturally more open to regular change, depending on circumstances and opportunities.

Who is right then?

Well from what little I’ve seen of it, most of the debate tends to be the agile crowd berating the planned crowd for the simplisticness of their position.  They argue that due to the inherent unpredictability of things, there’s no way your “fixed” strategy is going to pan out the way you intended.  Furthermore, what with everything moving so “fast” these days, you need to be alert to changes which may necessitate a change in direction.

All of this is true.

However this doesn’t make them right.

You see the purpose of strategy is not to be correct or accurate or even necessarily smart.  If it were their criticisms would be valid.  No the purpose is simply to provoke bold action which has the potential to yield significant gains.  To do this, the primary measure of a strategy’s quality should not be its sophistication, but its “actionability”:

In other words it needs many of the qualities that agile thinkers criticise in old-fashioned planned strategies.

The problem with the more technical and thoughtful models proposed by these guys isn’t that they are wrong – they aren’t – it’s that they’re boring.  They’re intellectual.  They don’t stick.  You can’t throw them at people who are half listening and expect them to make them happen.

Being right counts for nothing if nobody knows what you’re talking about, and it’s for that reason that in many of these pieces I give you concepts that I know are a bit flawed, but which are ultimately simple and memorable enough for you to actually do something with.  (Or at least I like to think so).

This idea of “wrong but better” is actually surprisingly common.  Lots of well designed things are wrong in the right way.  You may have seen this version of the London tube map (below) drawn so that it’s geographically accurate – as you can see, a total dog’s dinner.  The normal one is far more usable, even though it is in actual fact wildly misleading (Rory Sutherland has a great bit of spiel about how the tube map influences property prices in illogical ways due to the fact that it makes some places look more central than they are, and others less so – fascinating stuff I think). 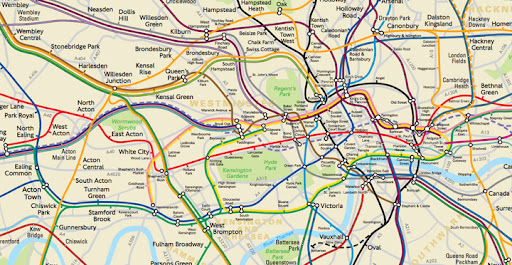 Anyway, returning to the subject of strategy, I was reminded of this the other day when a mate sent me this summary of a new book, How Strategy Really Works, by the former CEO of P&G, A. G. Lafley.  Now I haven’t read the book, but what struck me about the model here (basically “where will you play?” and “how will you win?”) is how basic it was.  Ripe for criticism from intellectual strategists you might say.  But then Lafley isn’t a “strategist” – he’s a CEO.  Someone who actually has to do things, rather than merely “think” them.  So on that basis, it’s his interpretation of strategy that I’d be inclined to listen to (even if it is a bit dry and corporate for my tastes – this is P&G we’re talking about here, after all).

Ultimately then this is why I personally err on the side of what might be labelled “planned strategy”.  Because people actually do something with it.  This is why I developed ideas like the strategic hierarchy – which is ridiculously reductive and incomplete, and yet I think all the more useful for it.

Being usable is more important than being right.  That’s the bottom line.

Before I leave you however one final thought: what about being both actionable and right?  Shouldn’t that be the goal?  Isn’t that possible?

This is why I always make such a big deal about allowing a business to find its own path, organically and emergently, which you then codify and get on board with – whether it aligns with your original plan or not.  By taking this “leading from behind” approach, you allow for the inherent complexity and unpredictability of the marketplace, and avoid the trap of following a foolish “masterplan” which won’t survive contact with reality.

(I think it’s that kind of hubris which agile strategy fans are probably wary of, and in that respect I’m totally on board with them)

As a result you may end up with a strategy which combines the actionability of a planned strategy, with the sensitivity of an agile one.  One which, if you articulate it right, can remain constant at the macro level for decades, whilst also allowing for lots of change and evolution at the micro.

So agile, planned?  Seems arbitrary.  Let’s try and have it all.