Ever notice how much better it is when your favourite song comes on the radio compared to when you listen to it on Spotify?

It’s weird isn’t it.  You’re driving along, radio humming away as background noise, and then you hear those first couple of beats and suddenly it’s volume up, windows down, hand beating the steering wheel – a feeling of elation all because of a track you could have listened to any time with only a couple of clicks.

There are probably various reasons for this, such as the element of surprise, which is lacking when you put on the song for yourself.  But perhaps the bigger, more subtle reason can be summarised like this:

The effect of a piece of information changes the more people there are who know about it.

That song on the radio differs from the same song on Spotify in one crucial fashion: lots of other people are listening to it too.  In fairness that may also be true of Spotify, but it doesn’t feel that way; it feels like you’re listening alone.  But on the radio you know that there are thousands of others simultaneously experiencing the same thing, and this enhances its power.

More than just enhancing its power, lots of people knowing a piece of information can actually change its meaning too.  The precise way this works is quite complex and little understood, but when you think about it it can be extremely profound.

Take perhaps the polarisation around COVID policy back in the day.  Everyone believed they were judging each piece of information based on its merits, and coming to an appropriate conclusion.  And probably if they’d been looking at it in a private vacuum, they would be.  But, as is clear from the political divisions on this topic, that’s not the case.  Yes, people were judging the information on its merits.  But they were also (perhaps more so) judging the information based on the responses of other people to it.  Supposedly “objective” facts are utterly transformed by the knowledge that millions of others know them too; infected by association and speculation.

It’s enough to make any sane person doubt their own preferences.  Do you really think what you think?  Believe what you believe?  Like what you like?

I thought of this dilemma the other day when I read a great article by Kevin Simler applying it to advertising.  It’s a fun read, so check it out, but sufficed to say the core idea is that one of the primary ways advertising works is through a process called “cultural imprinting”.

What does this mean?

Well, the author’s contention is basically that we use products for signalling – i.e. “what does using this product tell other people about me?”.  The main example in the piece is that of Corona beer, and how bringing this to a party signals that you are a laid back chill kind of person.  Now in order for this signalling to work, it’s not enough that we personally believe Corona is a “beer for chill people” – we have to know that others believe it too.  That way we know that when they see us with it, our signal will be understood.

This then is the role of advertising: to imprint a certain view of a brand on popular culture, so that people can then use it for intelligible personal signalling.

Note how this differs from normal assumptions of how advertising works.

Most people think that the role of creative ads is to build associations between a certain emotion and a brand, so you feel subconsciously positively towards it, and thus buy it in the future.  If this were true it wouldn’t matter if you were the only person on the planet who had seen an ad, since the association would still have been built inside your head.  However according to the cultural imprinting theory, this wouldn’t work, since ads need to have been seen by millions of other people to facilitate signalling.  Without that wider knowledge, any association the ad builds is useless.

Bottom line, the more people who are aware of an ad, the more effective it becomes for each one of them.

Part of the evidence for this theory – which isn’t totally accurate, but is pretty compelling nonetheless – is that you rarely get big ad campaigns for products which others don’t see you use.  If a product is used in private (like say bedsheets), then it has no signalling potential: thus brand advertising is ineffective.  It is only highly public products (like soft drinks and sneakers) which can really employ cultural imprinting to its full effect.

Now if you want my view, I think this theory is largely correct.  Or at least more correct than the “emotional association” theory most believe.

It certainly explains why targeted digital ads are so ineffective compared to mass outdoor campaigns.  When you see a digital ad, for all you know you’re the only one who’s ever seen it – so who cares?  But when something is plastered all over town you know everyone else has seen it too – thus it becomes important information.

But what are its strategic implications?

Well, it suggests that brands need to behave differently depending on the two following factors:

Taking the first point – signalling potential – we can see that the more public the consumption of a product, the more important having an “emotive” / “meaningful” brand is.

Being human, we want such products to say something about us, and so therefore these brands would be well advised to create such a narrative.  “This brand is for people like this”. By comparison non-signalling brands are perhaps better advised to have more function-led strategies.  “This product does something these other products don’t”.

(As I’ve said before great brands have an equal blend of both function and brand in their strategies – but nevertheless this idea helps indicate where the priority should lie.)

As for the second point – the level of fame – we can see another interesting implication.  Basically if your brand can’t afford mass advertising – i.e. to become famous – then there’s little to be achieved in being solely brand-led.  You could create the sexiest identity ever, but if few people know about it it will have no signalling potential, and thus be impotent.

A client illustrated this brilliantly the other day when he pointed me in the direction of the ads for the original iPhone.  Apple – the masters of stripped back, brand-led, “feeling” based advertising – did the unthinkable: a grimy laundry list of features and benefits.  Check it out: 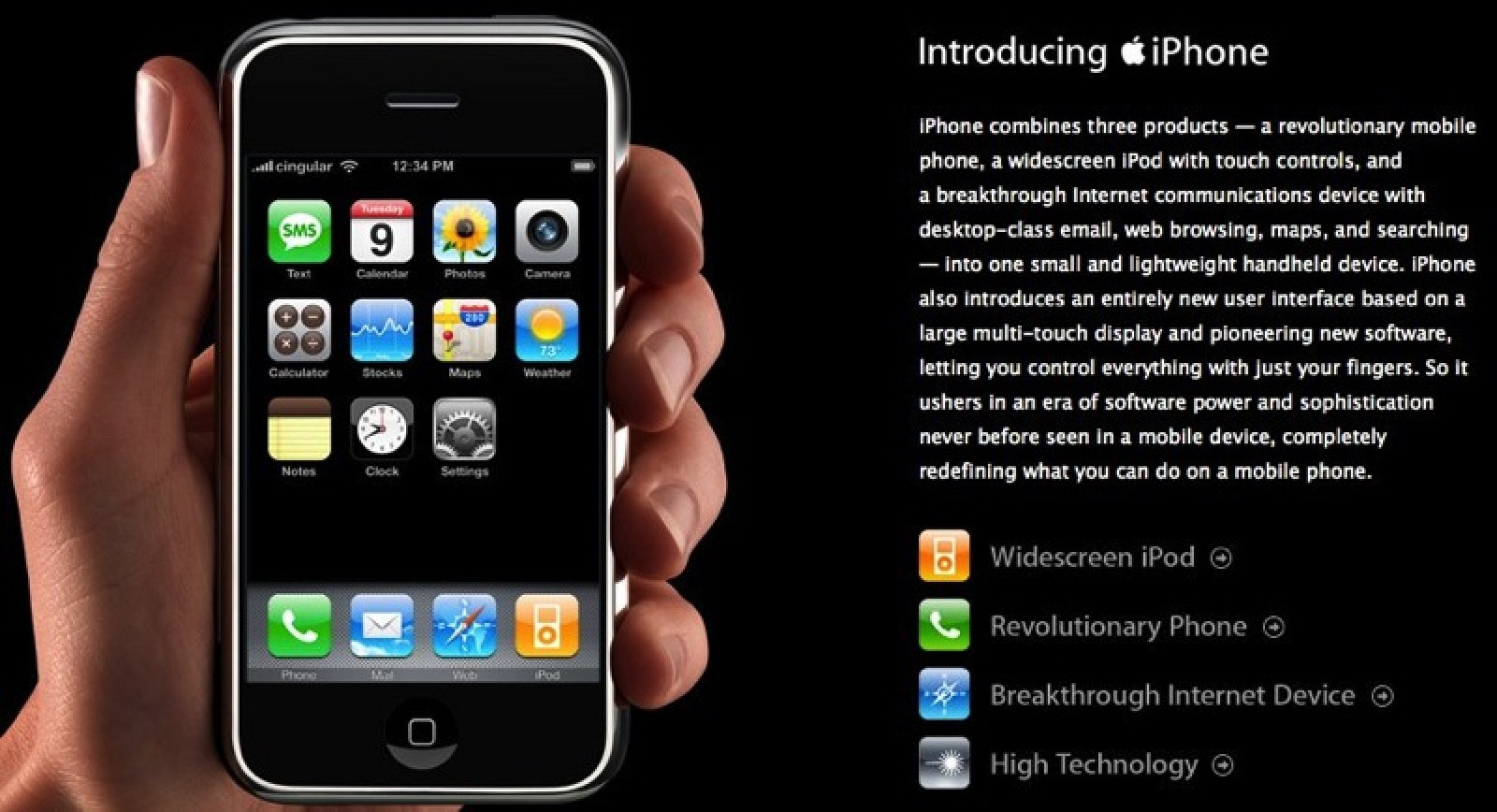 Now in fairness this kind of thing was coupled with some more artistic brand advertising too, but even so it makes sense when we consider the unfamiliarity of the product at the time.  Products that aren’t famous, and are seeking to achieve that initial entry into the market, may be better served with more functional arguments.  They can – and probably should – evolve to more brand-led strategies over time, just as the iPhone did.  But starting from a position of obscurity, that’s probably not the best bet.

To put a bow on all this, I reckon this handy matrix does the job: 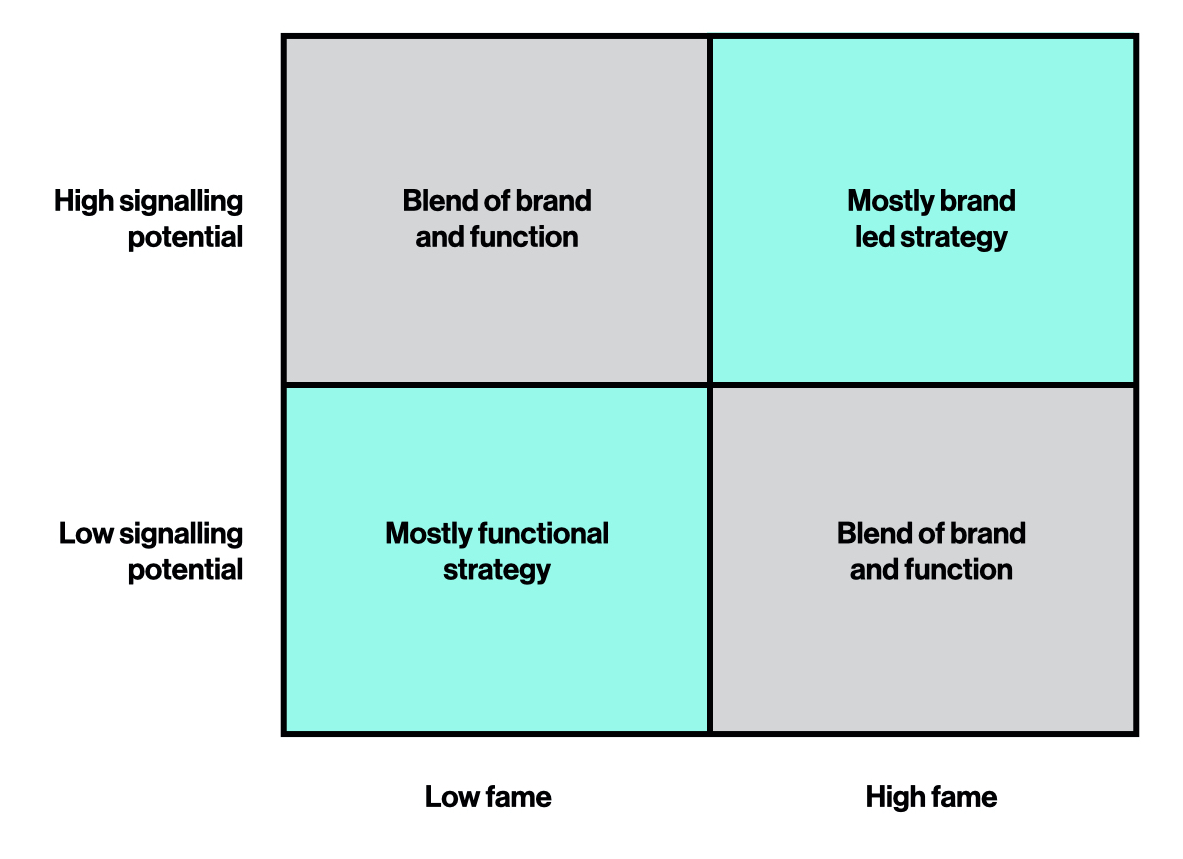 Is this always right?  No, I don’t think so.  But I think what ideas like this demonstrate is just how immensely subtle the dynamics at play with strategy and information really are.  We will never get to the bottom of them.  We will never master them.  We can only hope to glimpse blunt approximations of reality; nothing more.

So whatever you do, don’t slavishly adhere to such ideas like they’re gospel.  They aren’t.  Instead use them to make your thinking more loose, more fluid.  Because the goal of such frameworks isn’t to tie you down, but to help you break free of frameworks altogether.