How to be truly rebellious In 2022, there’s nothing more conformist than being revolutionary.

I’ve written about this before, but I still think it bears repeating that it can be quite hard now to find brands who don’t present themselves as being in some way maverick, rebellious, and counter-cultural – even (or especially) amongst corporate giants.

They all stand with their fists raised defiantly against “the man”, even if by all rational analysis they are the man themselves.

How this came to pass is quite interesting.  So far as I can tell, it’s all about the 60s.  The cultural eruptions of that decade gave birth to a number of genuinely contrarian brands such as Apple, Ben & Jerry’s, and Patagonia.  In each case they and their Boomer founders presented a challenge to the stuffy, traditionalist, suit-wearing archetype of the prior generation, and managed to triumph.

This however created a curious paradox: a new revolutionary establishment, with nobody left to revolt against.  The counter-cultural zeal, vibe, and vernacular remained, but without an actual culture to counter.  To suggest that the 60s values represented by these brands are in any way edgy or outside the mainstream today is laughable – but that doesn’t stop them pretending that they are.  “Sticking it to the man” has become “sticking to the straw man”, where we all act as if pre-60s culture was still dominant, when in fact we know in our hearts that it was defeated long ago.

Now don’t get me wrong, there’s nothing especially wrong with this kind of play acting.  LARPing the revolution is fun, stylish, and in a lot of cases really sells.  But let’s not kid ourselves:

Revolution is now better understood as an aesthetic than an act.

You don’t have to risk anything for it.  You don’t have to earn it.  You just do it as the default.  When you live in a world where the most feted children’s books are things like Goodnight Stories for Rebel Girls and Stories for Boys Who Dare to be Different, you can be sure that the meaning of “revolution” is a bit different than it used to be.

In short how do we break the rules in a way that actually matters?

The revolutionary aesthetic has trained us to forget this.  In our low-stakes play acting we are told that all rules are stupid, all norms are there to be smashed.  “Being different” has become the start point rather than end point, and being disobedient the default.

I grant you that revolution can look like this on the surface, but it isn’t really how things work.

Revolution is less an alternative to the status quo than it is the thing that comes after it.  It is something that you can only get to by first passing through the basics, rather than by rejecting the basics all together.  You’ve heard the phrase “you can’t run before you walk”?  Well it’s just the same – “you can’t revolt before you can conform”.  They are not separate paths, they are the same path, just one after the other.

This diagram will help explain what I mean: 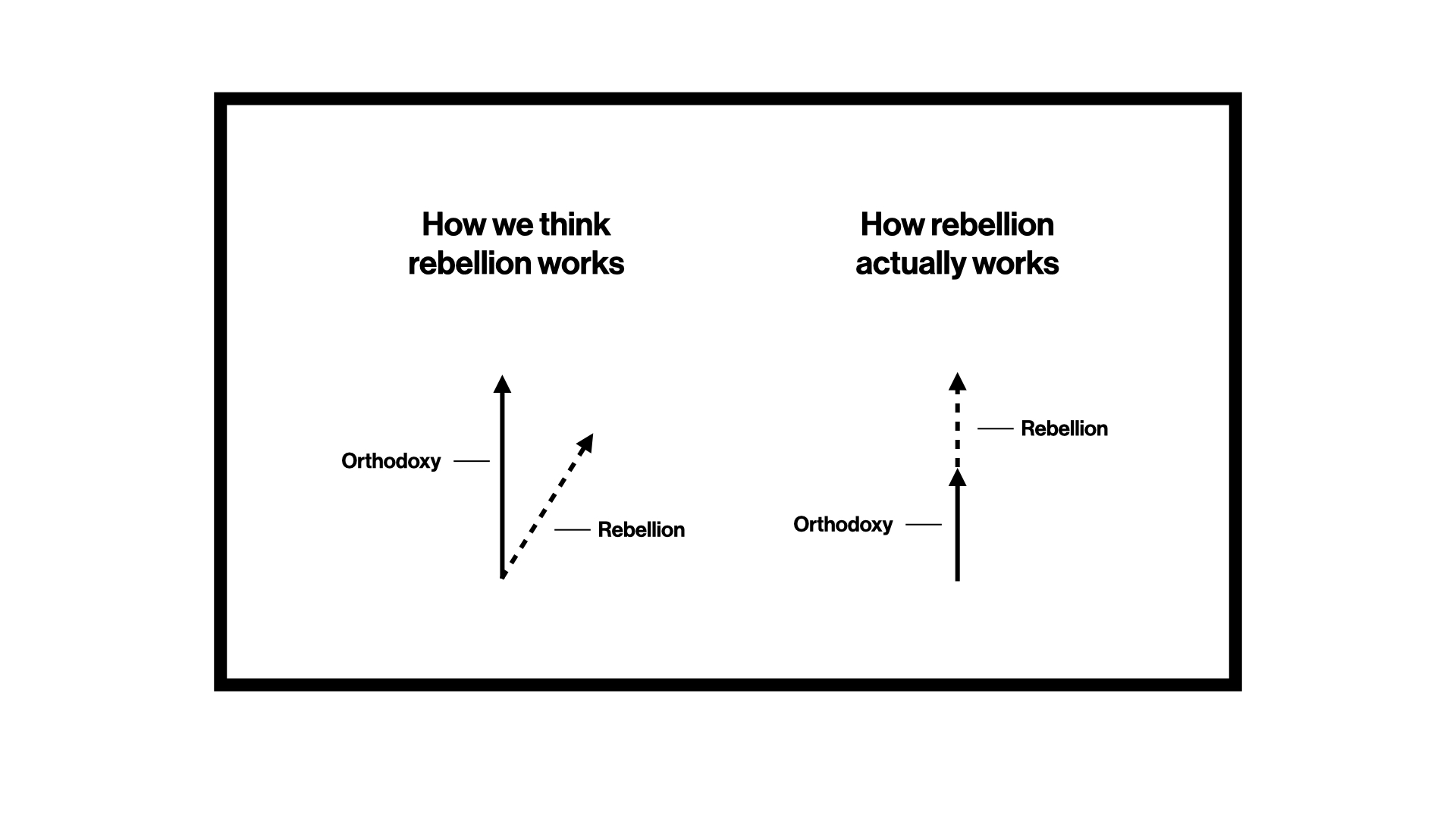 This idea of first mastering the rules before you break them crops up in lots of interesting places.

It can be found as a recurring theme in the Gospels, where Jesus – the archetypal “master” – constantly breaks religious law, much to the outrage of the priestly class.  The point being made is that when one truly understands the meaning of the law, you can break the letter of the law in order to uphold it.  The priests, lacking this understanding, cling naively to the rote rules even when they clash with their larger purpose – and thus are scandalised by Jesus’ revolutionary acts.

We can also see the idea underpinning much debate in contemporary education.  Many educators agree with Albert Einstein’s famous missive that “education is not the learning of facts, but the changing of the mind to think”.  In other words (according to some interpretations), we should be focusing on training rebellious critical thinking, rather than simply memorising boring old history, maths and Shakespeare.  The counterpoint to this however is that it is only from the foundation of the basics, of being reasonably knowledgable and disciplined, that critical thinking and innovation become possible.

Einstein himself is an arch example of this, given that he knew a hell of a lot of facts.

As for us, in a business context there are lots of interesting implications to this lesson which are routinely ignored thanks to our revolutionary play acting.

First among these is to embrace the learning of business fundamentals.  The rebel myth has trained us to assume that genius comes from the untrained mind, but for the most part this simply isn’t true.

As a case in point, I recently noticed that one of my former clients was doing some fantastic marketing – both highly creative, but also precisely on-strategy.  I got in touch with their marketing director and asked “what’s the secret”, since this is an area where mid-sized brands often struggle.  His answer?  Hire trained marketers.  It’s boring, but shockingly few brands do this – assuming that marketing is something that can just be improvised by a couple of bright and trendy 24 year olds.  Sadly it can’t.  It has discipline, it has knowledge – things which are required as a platformbefore one can launch into more rebellious territory.

A second, perhaps even more important implication is this: intimately understand your category.

Again, this sounds obvious, but I don’t think it is.  I certainly don’t think it’s commonly done.  Brands who upend category norms aren’t those who just blaze in “doing things differently” (they fail).  No, they are the ones who understand the category norms better than anyone else – and thus are able to see beyond them.  They know precisely which rules to break, and which to leave alone because they – like Jesus (weird comparison I know) – respect the meaning of those rules.  They don’t just see them as arbitrary rubbish to be “disrupted” for the sake of it.

One little technique you can use to test your understanding of the category is this: can you make a strong case for why your biggest competitors are successful?  Too many founders think the other brands in their category are “crap”, or somehow don’t deserve their success.  Or they will explain it away with some dismissive comment like “they’re cheap”, or “they’ve got lots of money”.  Such weak analysis betrays a lack of understanding.  There is a hidden reason the category behaves the way it does.  Only when you’ve uncovered that secret have you earned the right to question it.

You may have heard of Chesterton’s Fence?  Well, it’s a similar thing:

Ultimately there’s a reason why rebels – real rebels – are rare, and it’s partly because mastery is rare.  Mastery is boring, difficult, and time consuming.  And yet it’s the only path through which we can uncover insights that are truly significant.

So much as it’s fun to style yourself as a fearless free-thinker – and I’m as guilty as anyone when it comes to that – try to make sure that your contempt for convention doesn’t run too deep.

It’s only when you respect it that truly new paths open up.