How To Take Your Thinking To A New Level – Literally The yin-yang symbol has become a bit of a cliche.

These days it’s probably more likely to bring to mind a lower back tattoo than timeless wisdom, which is too bad, because its message is extremely relevant to our contemporary struggles.

It also reveals a method of thinking which is central to strategic wisdom, and it’s the subject I want to dig into today.

To summarise (and forgive the simplistic layman’s reading), the symbol represents how two apparently opposing forces may work together in order to add up to a functioning whole. These forces, rather than being “enemies”, are in fact complementary, reliant on each other for their own survival, and are in essence engaged in a process of “teamwork” rather than “battle”.  Together they add up to a larger “whole”, which is healthy and in balance thanks to their interplay.

For a real-world example of this, we might look to the political duality between (broadly) conservatism and progressivism.

We are used to understanding these two forces as enemies; engaged in a bitter conflict over competing visions for the future.  Crudely speaking the conservative wishes to ossify everything, keeping things the same, while the progressive seeks to change everything, and sees nothing as sacred. Naturally in each country around the world, political divisions are loosely drawn across this dividing line.

What few people ever credit – least of all the politicians – is the fact that these forces are not working against each other, but are rather working with each other. Each one contains a crucial insight and has an essential role to play within the larger societal whole. Conservatives recognise that many traditions, norms, and institutions perform extraordinarily profound roles – far more important and sophisticated than it may appear on the surface. They understand that such things may have emerged gradually over hundreds (or even thousands) of years of hard-earned experience, and as such, they are worthy of preservation and respect – and that to unravel them may have dire unforeseen consequences. Progressives, on the other hand, recognise that things are always changing; always in motion. They understand that with the ground shifting beneath our feet, what may have worked yesterday may not work today, and so institutions may over time lose their relevance or their efficacy. As a result, whilst the conservative seeks to conserve, they seek to change (or “progress”).

It is clear on inspection that both parties have a point, and that if either one was to gain total ascendency we’d have a bad situation on our hands. That is why a healthy society – like the “whole” represented by the yin and yang – is one where the two forces are engaged in a constant dynamic dance: the conservatives fighting for what rightly should be protected, and the progressives fighting for what rightly should be changed. If you’re lucky their negotiations are wise more often than foolish, and you produce a positive outcome.

We might say overall that each side should not only be tolerant of the other, but profoundly grateful.

Another slightly more sophisticated concept that describes this is that of the holon. Here’s a picture of one: 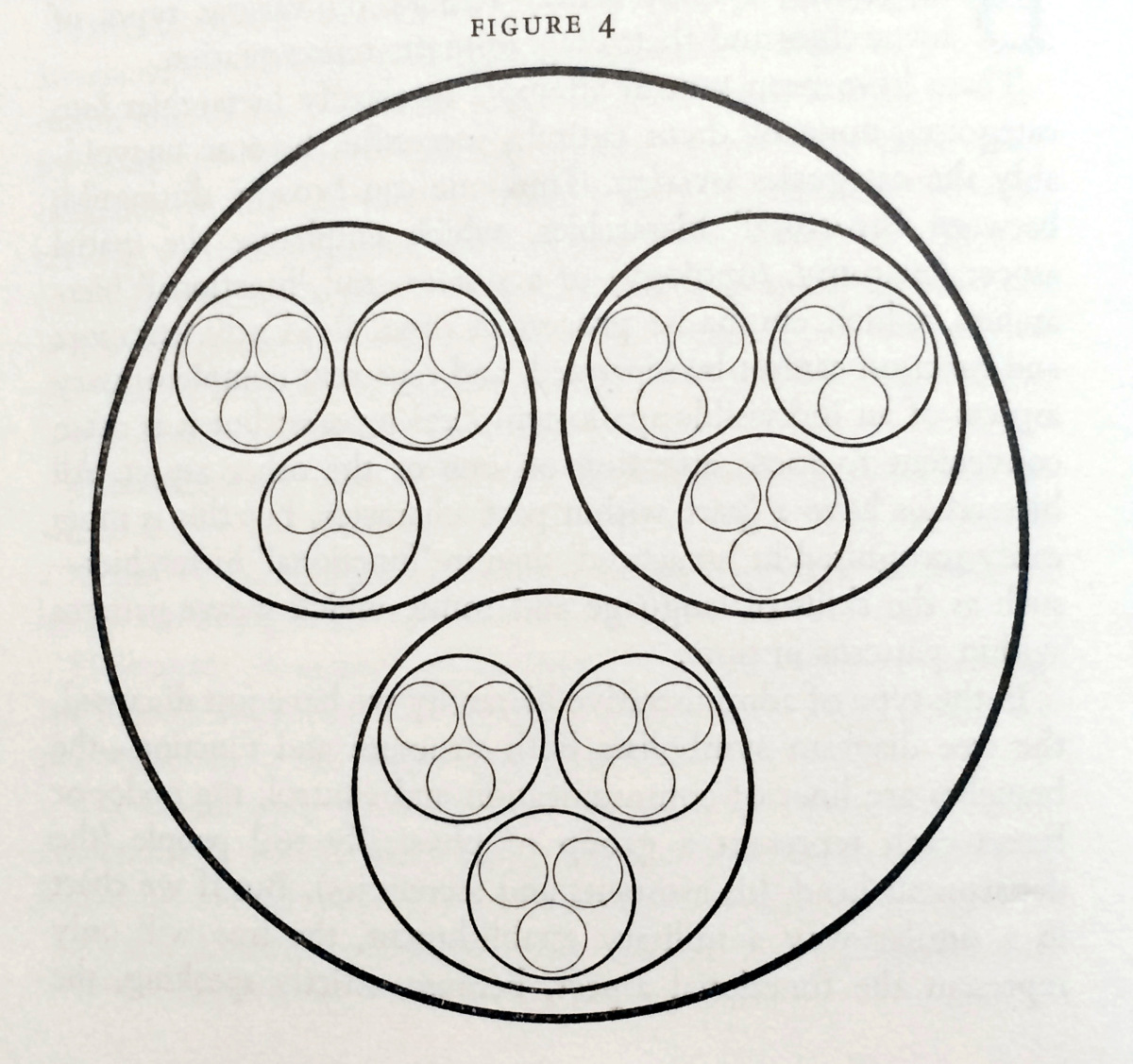 As you can see a holon is something that is simultaneously a whole and a part. The circles in the image play both roles. Again, this applies to pretty much everything. Your liver, for example, is a whole made up of parts (cells); but equally, it is a part of a wider whole (your body). Holons cascade across scales from the sub-atomic all the way through to the cosmic; at each level working together with other holons (e.g. the liver with other organs) in order to serve the holon the next level up.

This is probably more detail than I need to go into in order to make my point, but I think it’s wonderful so I bunged it in here anyway!

Now the purpose of yin yang or “holonic” thinking is this: it enables you to contextualise your actions within the larger whole you are serving, and thus encourages good decision making and strategic wisdom. What is good for the whole is good for the part, and therefore when the part starts thinking in terms of the health of the whole above it, it gets smart.

If you make adversarial decisions against the other parts at your level (like the battle between conservatives and progressives) then you will not prosper. This is rather like the organs deciding to go into battle against each other – not a great idea.  If however, you make harmonious decisions with the other parts at your level, then you will enhance the whole and in doing so improve your and their positions.

I came across a case study the other day that exemplifies this perfectly.

Back in the noughties, there was an explosion in the number of cider brands in the UK. One of the most important ones was Magners, who pioneered the custom of putting ice into cider thus making it a perfect summer drink – a big step on for the category from its dusty agricultural roots. As a consequence of their innovation, cider started to become more popular with the middle classes, who had up to that point ignored it. A Magners on ice was a classy premium serve, and allowed the drink to travel to a whole new market. Now the main incumbent brand at that time was Strongbow, who had dominated the cider market for many years. On seeing the explosive growth of Magners, they had a decision to make: do we try to push them back?  Do we start serving our product on ice too in order to defend our dominance? Thankfully they did not. Strongbow recognised that for the cider market to be healthy and balanced as a whole, it needed to cater not only to the new middle-class market, but its traditional working-class market as well. In other words, like the liver and the lungs, Strongbow and Magners had different jobs to do – they were partners, not rivals.

Therefore Strongbow worked hard to build the working class cider market alongside Magners’ success with the middle class.  To do this, they positioned the product as a reward for hard manual labour – essentially the drink of tradesmen. This was bought to life under the endline “hard-earned”; which pretty much said it all, and stood in nice contrast to the more effete Magners identity.

The result was that Magners and Strongbow grew simultaneously.  They worked together for the benefit of the larger whole, and both profited.

Strategic thinking is very much the same as systemic thinking; it is thinking that is aware of the wider system in which you participate. Thinking in terms of yin yang balance, or at a more sophisticated level of holons, is a way you can do this. It enables you to suddenly zoom out, and quite literally see the wood (whole!) for the trees (parts!).

Do this, and you will see that all your decisions exist in service to a wider construct and that the needs of that construct will tell you what to do.

Listen to it, and you will reach a whole new level of decision-making sophistication.

Tune into your strategic wisdom. Sign up for my newsletter where I share insights and tips that will help you learn how to think strategically.