Remapping the world: the rise of horizontal loyalty It’s time for another macro-trend piece.

As long time readers will know by now, these are my crude attempts to sketch some of the more subtle forces shaping the world around us.  As strategy is all about adaptation to context, it follows that we must understand our context to think strategically – and that’s what these pieces are all about.

The last two topics were concentration and hyper normal stimulus.  If you’ve not read them then check them out.  But otherwise let’s move onto today’s matter:

The rise of horizontal loyalty.

Where do these loyalties come from?  Well, that of course varies.  They may be religious, cultural, ethnic, or simply the reflection of a shared history and a shared land.  Forest people do things the forest way; plains people do things the plains way.  It doesn’t really matter: what matters is simply that such loyalties exist, and that they are particular.

Nobody – nobody – is loyal to everyone.  Nobody takes a genuinely “one word” perspective, despite the plentiful rhetoric to the contrary.  We all have “our people”, and therefore by definition we also have “not our people”.  This is only human, only natural, and there’s nothing wrong with it per se; it doesn’t necessarily imply animosity.  Our loyalties simply give us a shortcut with which to smoothly engage with others, without having to establish trust from a base of zero with every new person we meet.

And on top of this, they also give us a sense of home and belonging.

Now, as suggested above, human loyalties have traditionally been place-based.  They exist primarily between people who are from / live in a certain location.  Often they are multi-scale; strongest at the immediate local level, and then getting weaker the wider you draw the circle around it.  For our purposes here however, we’ll talk about them in terms of nations, simply because that’s a simple unit of “place” to discuss.

This “place-based kinship” is vertical loyalty.

The reason it’s “vertical” is because while it’s pinpointed in one spot, it also moves “up and down” the social spectrum.  In other words it binds people of different classes together, provided they have that place in common.  A Lord and his butler, although miles apart in “rank” may still feel a sense of brotherhood due to being from England, say.

This diagram illustrates what I mean: 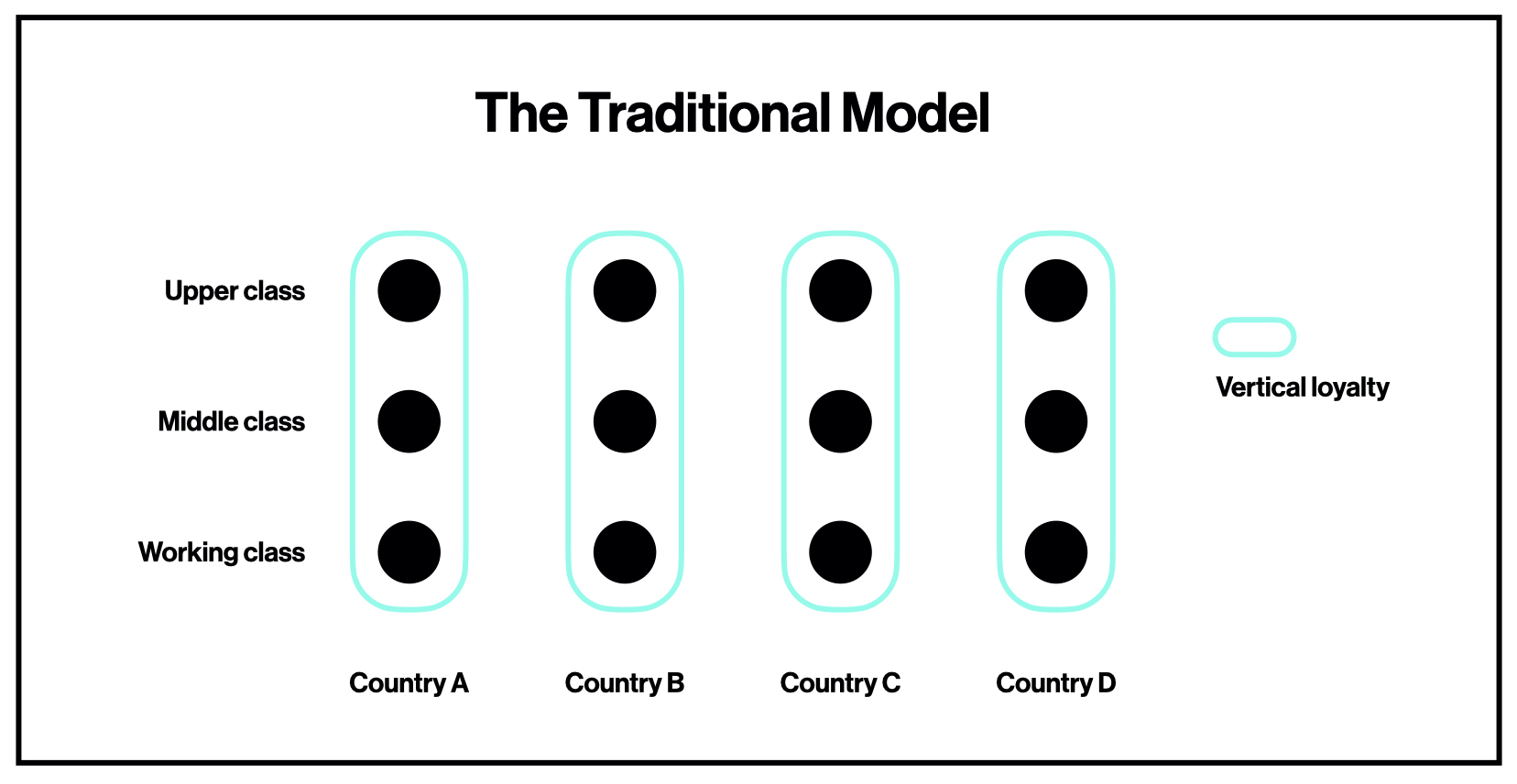 Vertical loyalty is the oldest and most common form of loyalty in the world.  It’s the loyalty which, like I said, created the nation state, and with it pretty much all legal, economic, and social systems we live by.

Well, at various points throughout history vertical loyalty has faced a challenge.  A typical example of this challenge can be found in the various communist revolutions of the 20th century.  These revolutions drew their lines of loyalty not from place, but from class.  “Workers of the world unite” is clearly a statement untethered from geography.  It says it doesn’t matter where you’re from, it just matters what class you are; that a worker from Peru should feel more loyalty to a worker from China than they do to their middle class neighbour down the street.

That’s horizontal loyalty, and on our diagram it looks something like this: 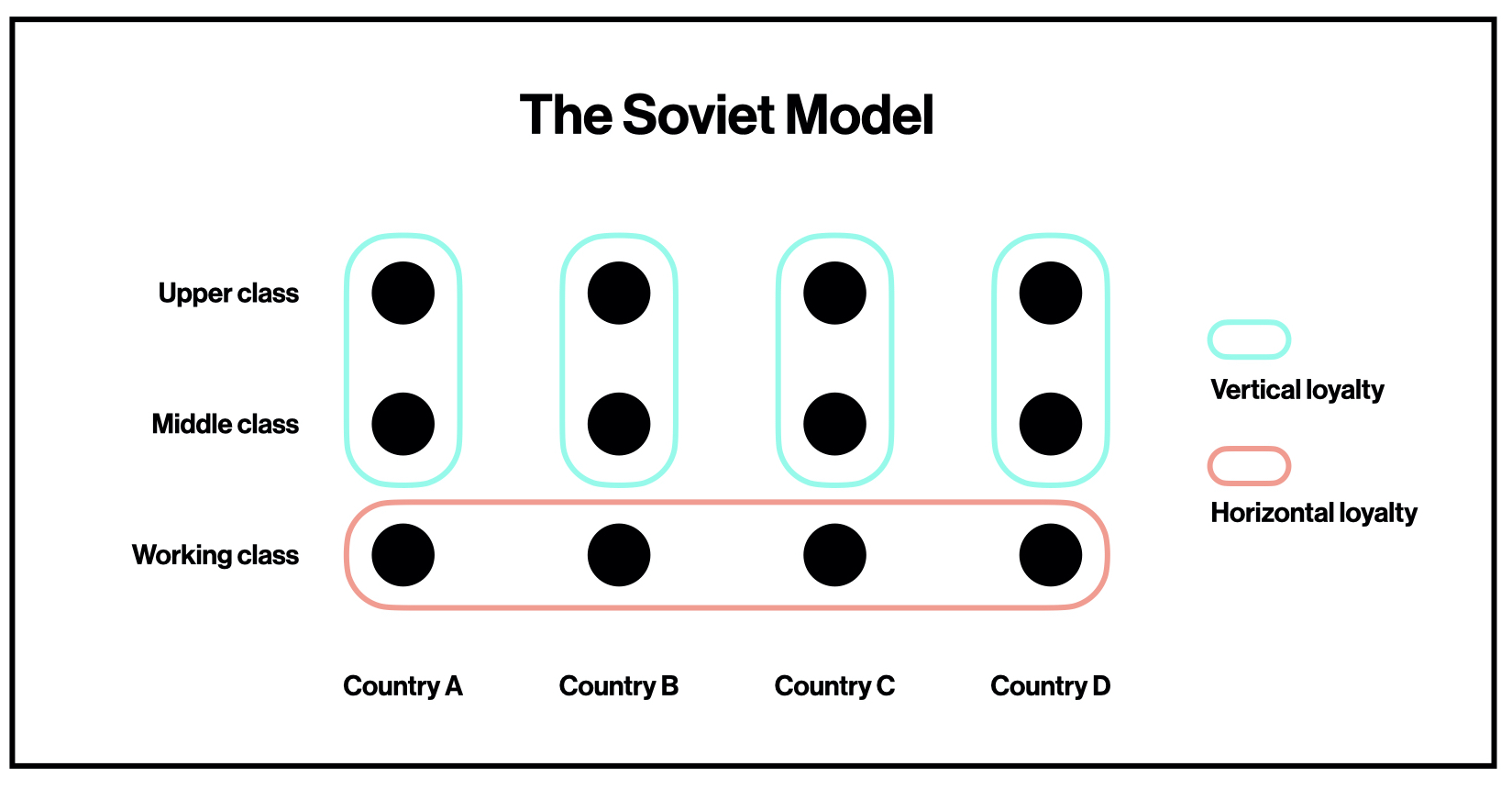 Now as both this image and history have shown us, the dilemma with horizontal loyalty is that it can be quite bloody.  That’s because it results in people living side by side with others who have conflicting loyalties.  Under conditions of vertical loyalty, this doesn’t really happen; you’re basically pals with everyone you’re likely to come into contact with.  But when horizontal loyalty is at play, that’s no longer true.  Your neighbour could be operating to a completely different set of values from you.

As a result horizontal loyalty is pretty unstable – and this instability probably contributed to the eventual collapse of the USSR’s horizontal model towards the end of the century.

Vertical loyalty went toe to toe with its challenger, and triumphed.

But that wasn’t the end of the story.  There was another revolution just around the corner.  One ultimately far more powerful than anything Marx envisaged: the internet.

As we discussed in the concentration piece, the internet’s central feature is the removal of boundaries, and the dissolution of place.  Naturally then we might expect this to have a corrosive effect on vertical loyalty, and so it has proved, but in a way that the revolutionaries of the 20th century perhaps wouldn’t have expected.

In essence what we see today is a high degree of horizontal loyalty not at the bottom of society, but at the top: where the values, opinions, and concerns of the global upper classes (which I think would include everyone I’m talking to here) have begun to converge, often in ways that decouple them from their vertical place. 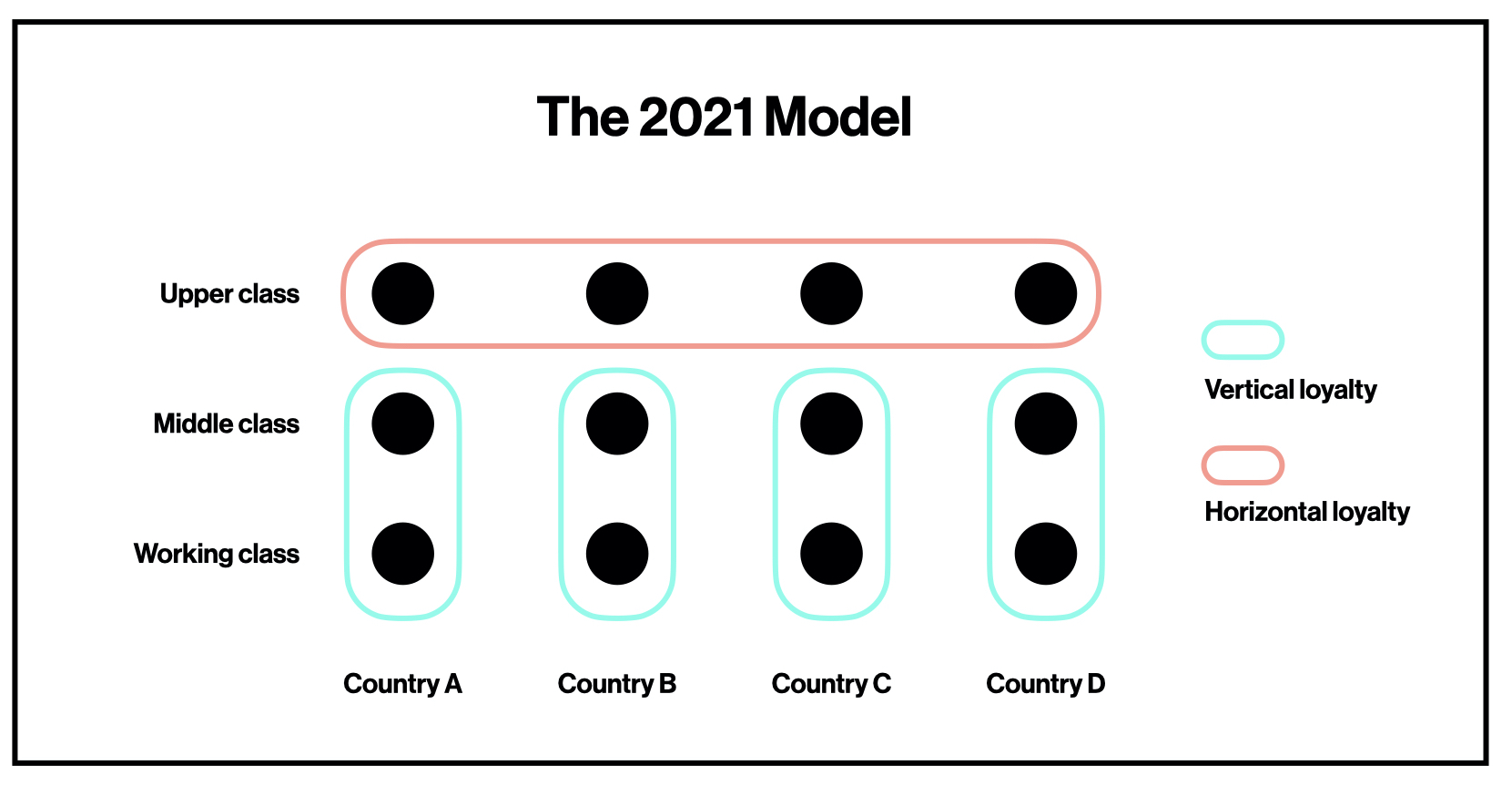 How this happened isn’t exactly rocket science.   Those at the top of the socio-economic ladder have the most access to the boundary-dissolving technologies of the the connected world.  This means they have greater means of finding each other than the rest of the world.  Couple this with the homogenising power of big tech algorithms and you have a recipe for unification and consensus across geographic lines.

There are naturally thousands of examples of this.  A pretty obvious and benign one can be found with TV.  Whilst the global lower classes (speaking broadly) continue to consume locally specific programming, the globally connected class are now coalescing around “horizontal TV stations” such as Netflix.  You and I probably consume pretty much the same cultural diet even if I live in England and you live in Brazil.  However this may not be the same diet as our neighbours down the street.

We might even say that “political polarisation” isn’t really a policy conflict at all; it’s instead a conflict between the models of vertical and horizontal integration, just like the Cold War (with which of course it shares many dynamic characteristics).

Anyway, plenty has been written about all that stuff, and it’s not my remit to get into it here.  What’s more interesting I think is following the thread of horizontal integration a little bit further, to see where it may lead.

If we accept the idea that the internet encourages horizontal loyalties rather than vertical, then it stands to reason that as it continues its march across the globe more of these kinds of loyalties will emerge.

This isn’t a game that only the so-called “metropolitan elite” can play – everyone can.  Provided they have the technology of course, which increasingly they do.

This may lead to a future looking something like this: 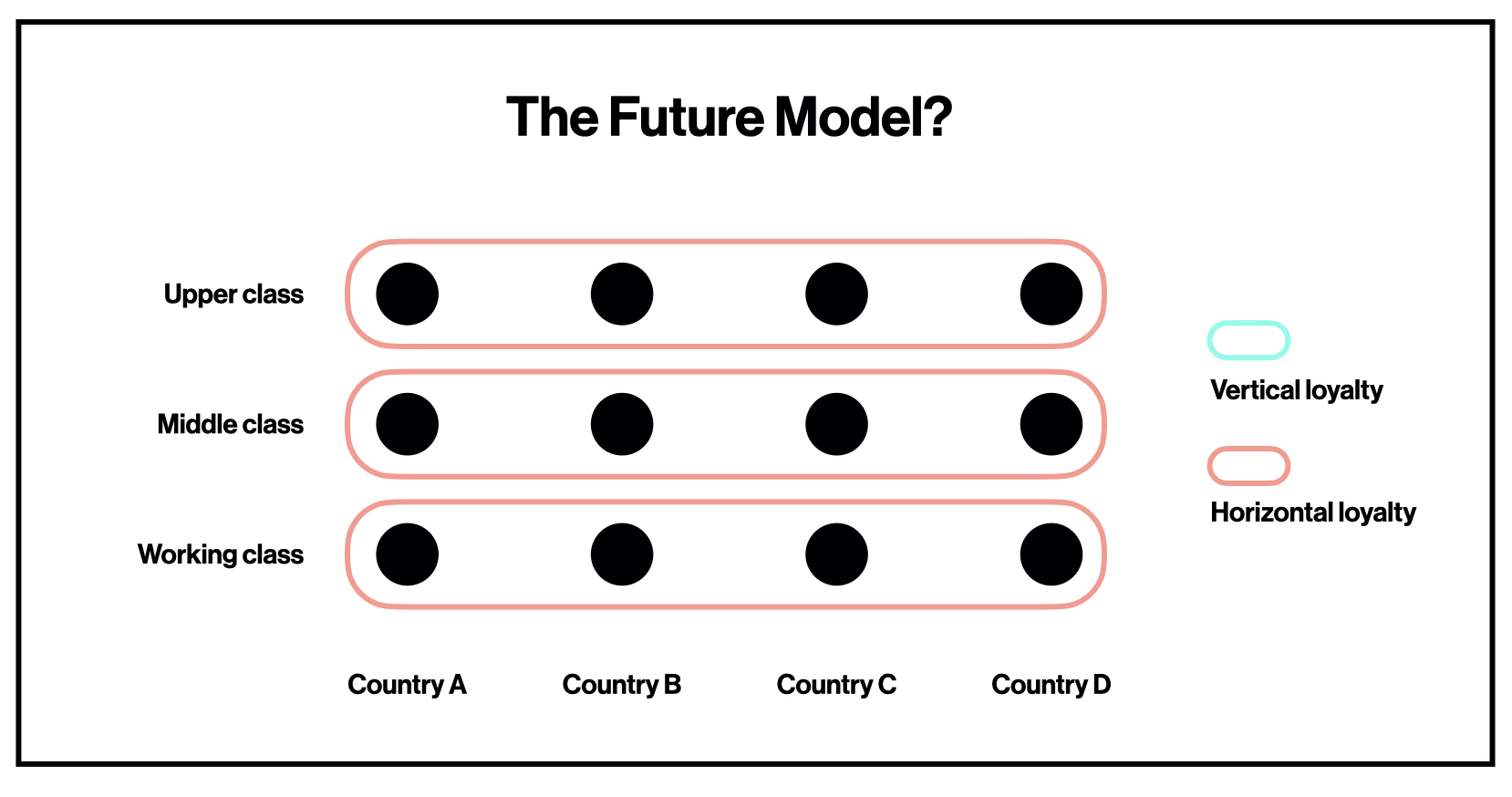 Understand of course that the reality would be far more complex than simply the binding of the upper / middle / lower class.  I use these terms only to illustrate the principle.  Horizontal loyalties could organise like this, sure.  But they could also organise along the lines of religion, political persuasion, cultural preferences, ethnic background, who knows.

However it happens, the key thing is people will no longer get their sense of belonging in place but in something untethered from place.

What would this mean?  Well, who bloody knows, but clearly a hell of a lot.

For a trivial business thought, we may need to start thinking differently about what constitutes a “market”.  At the moment we draw these via geographical boundaries.  But will that be the right way of thinking in the future?  When you launch a business, will you be launching it to a “vertical loyalty bubble” like the UK, or France, or India?  Or will you be launching it to a “horizontal loyalty bubble” of like minded people spread around the world?

Even today I think it’s worth considering whether your company operates within horizontal or vertical loyalties – but in the future this question may well be standard.

Less trivially we will of course have to contend with the same dilemma as the past revolution: the local intermingling of conflicting loyalties.

Indeed many people may even come to question the very legitimacy of structures which are organised vertically in the first place.  If you see your identity as being unrelated to the land under your feet, then where does the authority of that land’s legal, economic, and social system come from?

In the past it came from the consensus of a mutually loyal local populous.  But if such a thing ceases to exist, then what then?

But anyway, this is all just sci-fi speculation.  The result, as always, will be something far less crisp than such theorising suggests; but it’s intriguing to think about nonetheless.

My purpose with this piece was simply to introduce you to the vertical / horizontal lens of looking at the world, and hopefully I’ve done that.

I hope you find it somewhat useful – and not too scary.