The danger of knowing too much The more news you consume, the more ignorant you may become.

How can this be true?  After all, clearly the person who reads the paper regularly, watches a 24 hour news channel, devours current affairs podcasts, and spends hours on Twitter will end up knowing an awful lot of stuff.  Certainly far more than the person who does none of those things.  Given that we equate knowledge to wisdom and understanding, it should then stand to reason that the news hound will develop a very good idea of the way the world works.  And yet this isn’t always the case.

The issue is nothing to do with fake news (although that certainly doesn’t help) – it’s simply one of proportionality.  The news media naturally favours stories which are extreme, negative, and which fit into certain meta narratives that drive sales.  This means of course that reading the news will give you a distorted picture of the way the world really is: overemphasising some things and underemphasising others, ultimately leaving the reader crippled in their ability to see the big picture.

I’m sure we all know someone like this – or perhaps are even like this ourselves.  I for one know that there are certain media talking points which get me riled up, even though I’ve literally never encountered these issues in real life.  This isn’t “being informed”.  It’s “being corrupted”.  Two things which are far more similar than they initially appear.

In comparison the person who consumes little of this may not “know” a lot in terms of facts and events, but what they do know will be via direct experience and as such will be proportionate and realistic.  They are closer to seeing the world as it is, rather than an image of it that is warped through arbitrary information.

I use this idea to furnish the basic message of this piece, which is simply:

Too much detailed knowledge can lead to poor decision making.

On paper this shouldn’t be the case.  On paper all accurate information should be useful in understanding an issue, or developing a strategy.  The problem however is that since we are incapable of gathering complete and proportionate information on any issue, we have a tendency to get overly swayed by the limited information we can collect.  The more trees we pay attention to, the less we are able to see the wood, leading to a narrowing of our perspective the more we learn.

This diagram illustrates the point.  You start with low knowledge but holistic thinking, but as you gather knowledge your thinking narrows. 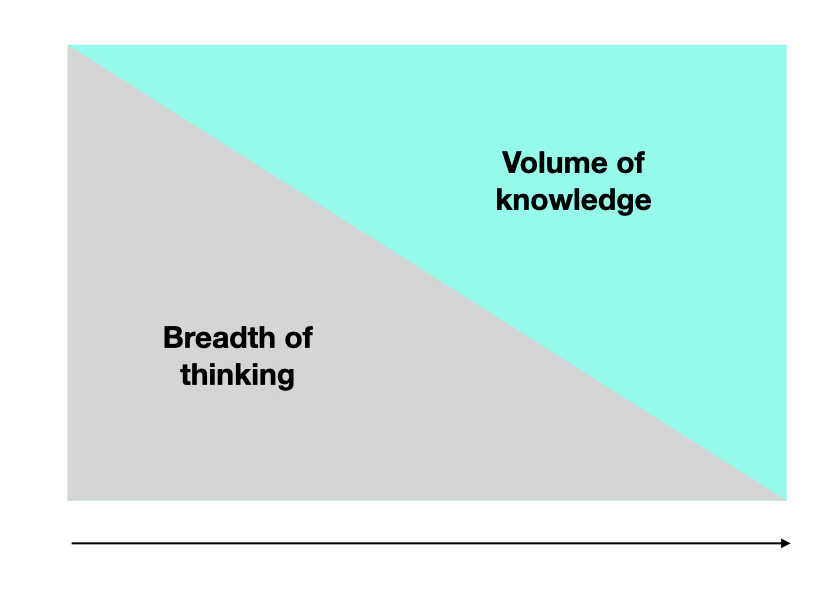 A real world example of this idea that I’ve mentioned before can be found in the debate concerning the health effects of sunshine.  We used to intuitively understand that sunlight was good for us.  It raises our mood.  It gives us a healthy looking glow.  Plants grow towards it.  It warms us.  Etc.  However when science learned of the link between sunshine and skin cancer, the message reversed.  We entered a period where we were actively encouraged to avoid the sun, and to wear sunscreen every day as a matter of routine.  Now that the science is becoming more subtle, we are beginning to see that this was an error, and that although the link between the sun and skin cancer is of course true in a narrow sense, that doesn’t mean the sun isn’t good for us on the whole.

This was a classic case of detail-oriented thinking clouding our sense of the big picture.  This happens all the time in businesses – so much so that I’ve found I’m often able to make meaningful breakthroughs in my very first meetings with prospective clients.  It’s not that I come up with anything particularly groundbreaking or insightful.  It’s just that I know nothing, which forces me to take a big picture perspective that the far more knowledgable client is no longer able to take.

This distortive power of detail contributes to a further paradox which I absolutely adore:

Idiots and geniuses tend to come to the same conclusions, whilst merely intelligent people come to different (and wrong) ones.

As you can probably gather, what idiots and geniuses have in common is the ability to see things holistically and intuitively.  Perhaps in the idiot’s case this is because they have no other information, don’t overthink things, and thus have no choice – whist the genius is knowledgable but knows how to handle that knowledge – but either way the end result is the same.  The merely intelligent person on the other hand, with their bias towards hard facts and analysis tends to cling to what little knowledge they have, and thus arrives at a flawed conclusion.

I know it’s a bit cringe to quote Albert Einstein, but nevertheless he nailed it when he said: “The intuitive mind is a sacred gift and the rational mind is a faithful servant. We have created a society that honours the servant and has forgotten the gift.”

Fetishising detail and facts is the mechanism by which we forget the gift, whilst fooling ourselves into believing we’re doing the “smart” thing.

In sum then, whilst I would never discourage the gathering of quality data when tackling a problem, I would encourage you to hold that data lightly.  Embrace not only the facts, but more importantly the gist.  Get comfortable with generalisations.  Become a master of the sweeping statement.  Because these pejorative terms aren’t your enemy, they are your friends.  They are tools for proportionality, and the fruits of intuition.