The how cascade – where goals end and strategy begins Of all the strategic sins one could commit, there are few more heinous than the confusion of “goals” with “strategy”.

Fortunately it’s so bad that it’s become something of a cliché.  You don’t need to know an awful lot about the field to recognise that “becoming number 1”, or “doubling our revenue”, or “pursuing excellence”, are decidedly not strategies.  And certainly if you’re reading this newsletter, I doubt I even need to point this out to you.

But even so, although we may be immune to such obvious crimes, the “goals vs strategy” conundrum can still trip us up when we least expect it.  The line between the two is not crisp, but blurred – with one fading gradually into the other – and as such even for the most strategically minded, it can be quite tricky to tease them apart.

I myself have on numerous occasions alighted on what I thought was a great strategy – only to conclude on closer inspection that it was in fact still a goal, and that the true solution lay somewhere deeper.

That’s why it’s important to have an effective way of spotting the difference.  Without it, you risk following a goal masquerading as a strategy, with all the confusion and ineffectiveness that goes with it.

So, today I want to introduce you to just such a technique – “the how cascade”.

Before getting into it, there’s something important you need to understand.  Conventionally we think of goals and strategies as being two quite distinct things.  The goal is the thing we want to happen, the strategy is the way we’re going to make it happen.  Sounds easy – but there’s a sting in the tail.  You see whilst some goals are indeed “pure outcomes”, other goals contain a strategic thought within them.  They are technically “half goal, half strategy”.  They lay out an ambition, just like a goal, but they also hint at a solution, like a strategy.

Consider these two hypothetical goals for a dog food company:

What do you notice here?

Well, goal 1 contains basically no information within it whatsoever.  It states an ambition – double revenue – but it gives zero clue as to how that might be achieved.  It leaves the strategic solution totally open.  Literally any idea you could come up with to double the revenue would be totally fine.

We can call this a “general goal”.

Goal 2, on the other hand, isn’t like that.  It contains specific information – becoming the number 1 dog food for pensioners.  That means that the strategic solution is no longer open: the strategy must be tailored to improving sales amongst pensioners.  It’s not an option to pivot to teens, for sake of argument.  A decision has already been made.  An idea has already been half formed.

We can call this a “specific goal”.

Now, because of this specificity, it is easy to confuse such a goal with a strategy.  Indeed, we could imagine someone answering goal 1 – “we want to double our revenue” – with goal 2.  “Sure, no problem, you can double your revenue by becoming number 1 with pensioners”.  And indeed, that might be a step in the right direction.  But it’s still not a strategy.  It’s just a narrower goal.  It still begs the question “how?”.

And that’s where the “how cascade” comes in.

With the how cascade, you simply keep asking “how?” to every goal / strategy you come up with, cascading down into ever greater specificity, until you have come to an answer that leaves you in little doubt as to what you’re doing.  At that point, and only that point, do you have a strategy.

Let’s use it on the above example.

“We want to double our revenue” – OK, how?
“By becoming the number 1 dog food for pensioners” – OK, how?
“By tailoring our offering to lap dogs, which they predominately own” – ah, OK, got it.

You see how the final one has the characteristics of a solution rather than an ambition?  How it’s specific enough that it tells you what to do, rather than leaving you with more questions?  That’s a strategy.  Perhaps not a great one, a strategy nonetheless.

Of course, the keen-eyed amongst you may have noticed that we could keep asking “how”, and go even lower in the cascade.  That would take us into tactics, or “actions”.  Indeed the entire flow of a business, from the most lofty ambition down to the mere purchasing of a paper clip can be captured using the how cascade. 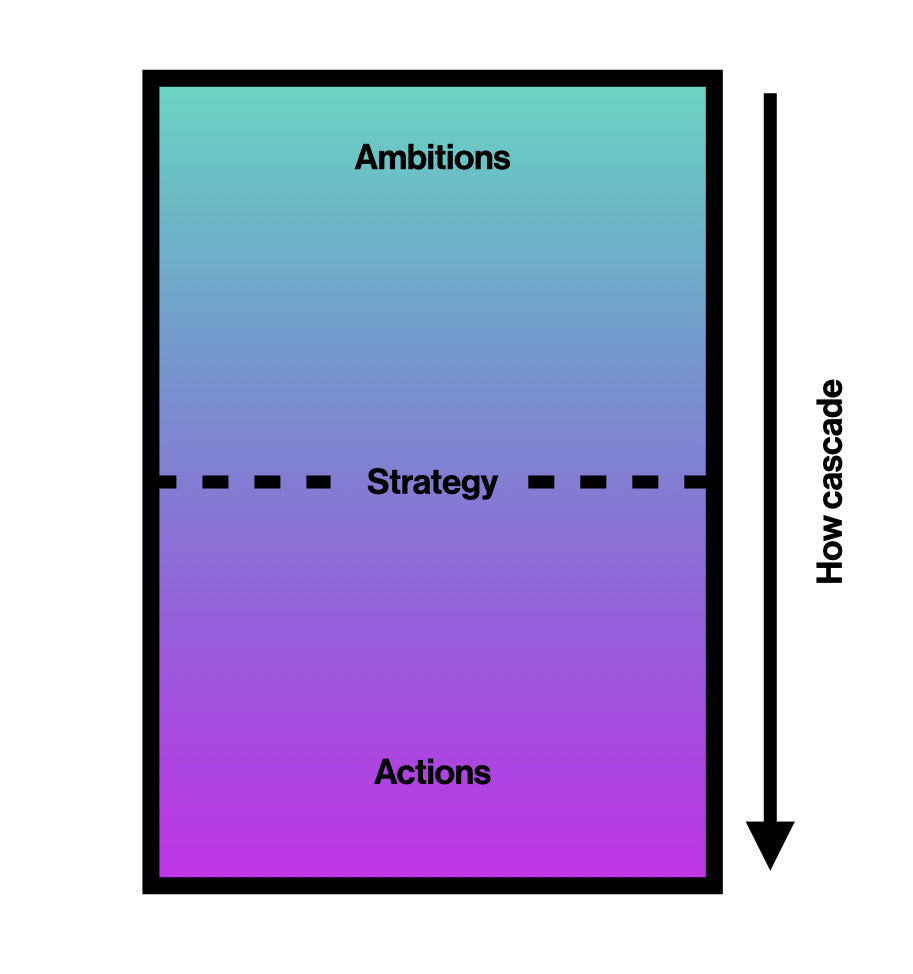 The art comes in having the sensitivity to recognise which “slice” of the cascade is the strategy:

The slice specific enough to be a solution, but still broad enough to cover the whole operation.

The utility of this is pretty straightforward then.  When you have a strategy – or rather when you think you have a strategy – ask the obvious question.  “How?”.  If you feel that question begs an answer, and that the solution isn’t obvious, then you’re still at goal level.  You need to go a layer or two deeper.