The most simple strategic framework I’ve made a song and dance in the past about my aversion to templates, models, frameworks, and the like in order to generate strategy.

None, I believe, can be said to perfectly match every possible strategy – and in some cases they can even drag people away from perfectly good solutions, simply because they weren’t able to cram it into the (totally arbitrary) shape the framework laid out.

However recently I was thinking about this, and I realised something: the issue with frameworks is necessarily their templated nature.  There’s nothing inherently wrong with laying out information in an orderly “patterned” manner.  No, their issue instead is that they tend to assume a certain type of solution by virtue of their wording.  They try to hold your hand just a little too tightly, offering a little too much guidance, and in doing so narrow your options arbitrarily – ending up as your master, rather than your servant.

Examples of this include finding your “why”, which assumes the heart of any strategy is your reason for doing what you (sometimes it is, often it isn’t), and any framework which gives you a sentence structure to fill in (e.g. “GET-TO-BY” and the like).

This then made me wonder what a strategic framework would look like stripped back to its very core, with no assumptions whatsoever – one that would fit literally any strategy in any context, but would also help you generate it.

My suggestion, in its barest form, is this:

That’s it.  On the face of things it probably looks pretty basic – too basic to add any real value.  However it has two key characteristics which give it hidden power.

The first is that prevents the two most common strategic sins, namely:

By explicitly separating goal and strategy, the framework prevents you from slipping into the “goal as strategy” trap, and thus holds you to account.

As for the second of these sins – strategies that don’t result in concrete action – naturally the bottom part of the framework sorts that out.  A strategy should always contain within it a handful of key actions which need to be taken in order fulfil the strategy, and achieve the goal.  These shouldn’t be kicked down the road, as things to be “figured out later”.  No, they need to be as close to the heart of the strategy as possible – as close as the goal the strategy is pointing at.

If you fill in this framework without actions, or with actions that aren’t clear reflections of the strategy, it will immediately jar.  Thus another trap is avoided.

So that’s it’s “defensive” power – what about it’s “offensive” potential.  Is it simply a tool of articulation, or can it help with our ideas too?

Since my whole thinking with this was not to assume a particular type of strategic solution, it doesn’t guide you effortless to your destination.  You’re still going to have to do some thinking I’m afraid.  However it does have one little trick up its sleeve, and that’s what happens when you tackle it out of sequence, like this:

Now, doing things in this order, if you’re going to be purist about it, is sacrilege.  “How can you possibly come up with actions without a strategy?!”, you may ask.  And of course, officially speaking, you can’t.

But in the real world?  Of course you can.

I regularly find on projects that I come up with effective executional ideas before I come up with a strategy.  Give someone a goal and they won’t typically respond with a strategy.  That’s too intellectually taxing, too abstract.  No, they’ll jump straight to ideas instead.  They might say “hmm, wouldn’t it be cool if we sold our product there”, or “imagine if we changed the packaging to this”, or “wouldn’t this be a great NPD idea”.  Such ideas are not necessarily un-strategic.  They have rationales, however flimsy – and within these rationales a great strategy may be lurking.

In the world of agencies this “reverse” process is commonplace (though hated by strategists).  I can recall many occasions in my old career when someone would throw out a winning creative idea before a strategy was generated.  The human brain works like that – genius is quicker than methodical calculation.  When you got an idea like that, an idea everyone instinctively agreed was great, the next question was why?  Why did this work?  And often by answering that question you would reveal the strategy.

Done in this order then, strategy becomes less a means of generating ideas (although it will do that too), and more a way of rationalising and sense checking them.

Rather than coming up with a strategy “top down”, you instead do it “bottom up”, by asking what the inherent strategy is of the actions you’ve come up with.  What do they all have in common as a group?  How do I summarise them into one thing?  And of course most importantly, how do they achieve the goal?

If you can come up with an umbrella concept which ties the actions together, and a strong rationale for why it works, then guess what – you’ve got a strategy.

The fact you post rationalised it from executional ideas?  Who cares.

Considering this, you might well ask why we even have the “strategy” section of the framework at all.  If we have our goal, and our actions to achieve the goal, isn’t that enough?

Well in a practical sense, yes it is.  Actions do the dirty work, so strictly speaking they are the only thing you really “need”.  However the strategy does a couple of crucial jobs to support them:

Ultimately what you’re looking for is a completed framework where the strategy acts as clear and memorable summary of the actions, and which in turn explains quickly and succinctly just how you’re going to achieve your goal. 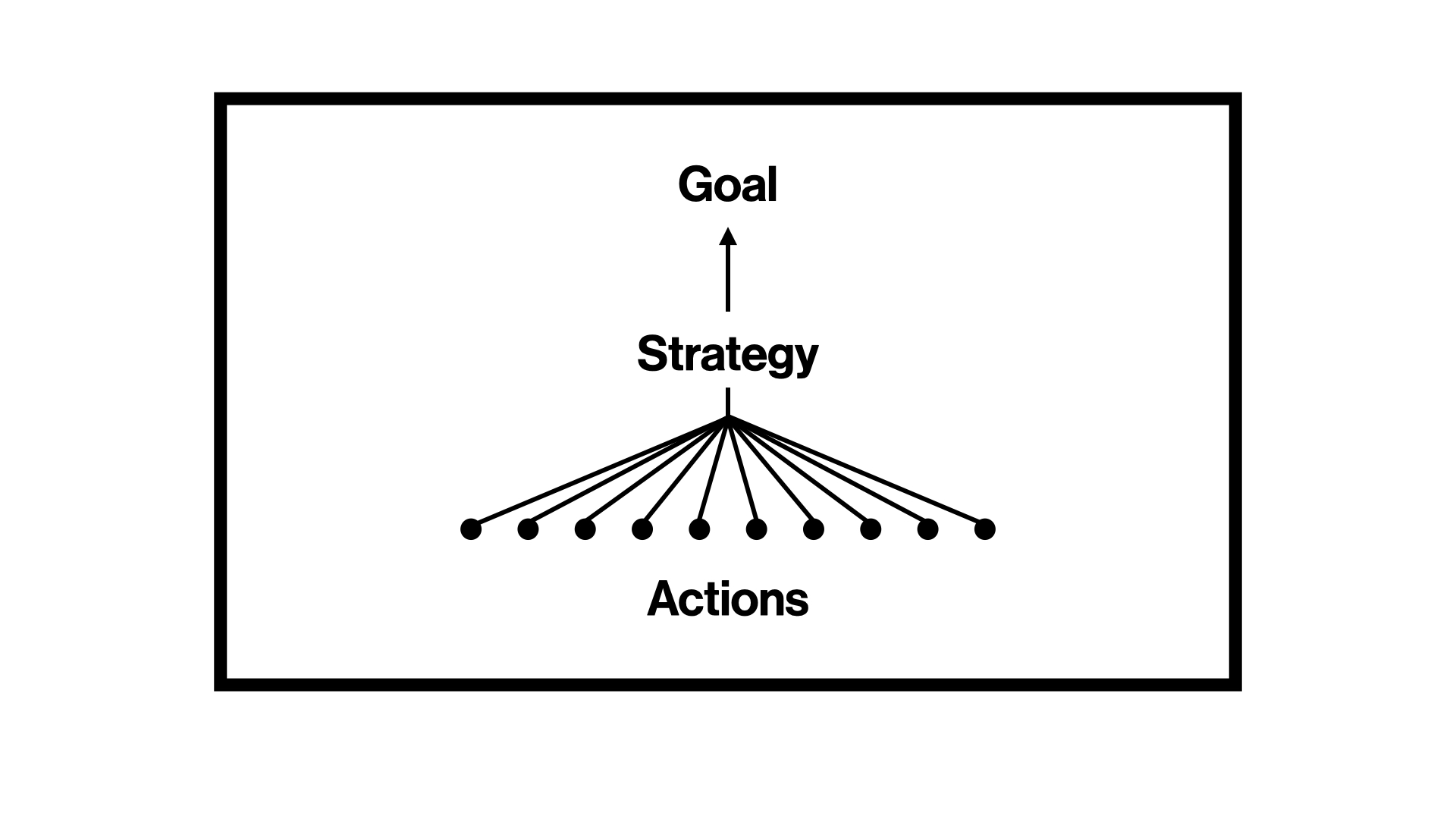 Don’t think you can go to far wrong with that.