There are two types of strategy – which do you need? Ostensibly, a business strategy is about growth.  Figure out a direction, execute on it, sell more stuff.  Simple as that.

However, whilst this is broadly true, the process by which you find a strategy can be quite different depending on your stage of development.  Indeed the way one business goes about it can be the complete opposite of another, depending on some basic characteristics.

In this piece I want to spell out these two big varieties of strategy, who they are for, and the key differences between them – so you can order your thoughts accordingly.

Now in most ways these strategies are exactly the same.  They both boil down to finding and owning unique space in the market, and as such the vast majority of the techniques we discuss here are equally relevant to either of them.  However there are some key distinctions.

As the name suggests, these are strategies for early stage businesses.  Now when I say “early stage” I am not necessarily talking about the age of the business – that’s incidental – what I’m really talking about is whether the business has traction.  If it doesn’t – if it’s not yet profitable and wouldn’t be able to survive for a long period of time in its current state – then it’s early stage.  These are brands who haven’t “made it” yet – be they pre or post startup, those who are struggling to gain a foothold in their market, or those who are burning through cash in order to stay afloat or hold down a position.  The strategy of any business like this is, by definition, a starter strategy.

The requirements of a starter strategy include:

Compare this to the other kind of strategy…

These are strategies for businesses which are already profitable and stable.  They may still be messy, they may be conflicted, they may be under severe pressure, and they may even be in negative growth – but regardless they have, in some sense, “made it”.  They have something which, to some extent at least, works.  Indeed they may also be wildly successful.  They may be growing phenomenally, dominating their market, and setting the world on fire.  Whether the trajectory is positive or negative doesn’t really matter – all that matters is that they have traction and are functional.  For them any strategy will be a maturation strategy.

The requirements of this include:

In short, they need strategy to mature.  To become the “final version” of themselves.  To figure out who they are, and settle down to the business of doing it really well, in a manner that no competitor can touch.

As you can see these two categories cover every kind of business you can imagine – from pre-launch right the way through to 50 year old multinational.  No matter who you are, if you’re developing a strategy, you’re doing one of these two.

To help illustrate it still further, I’ve plotted them on a hypothetical growth chart: 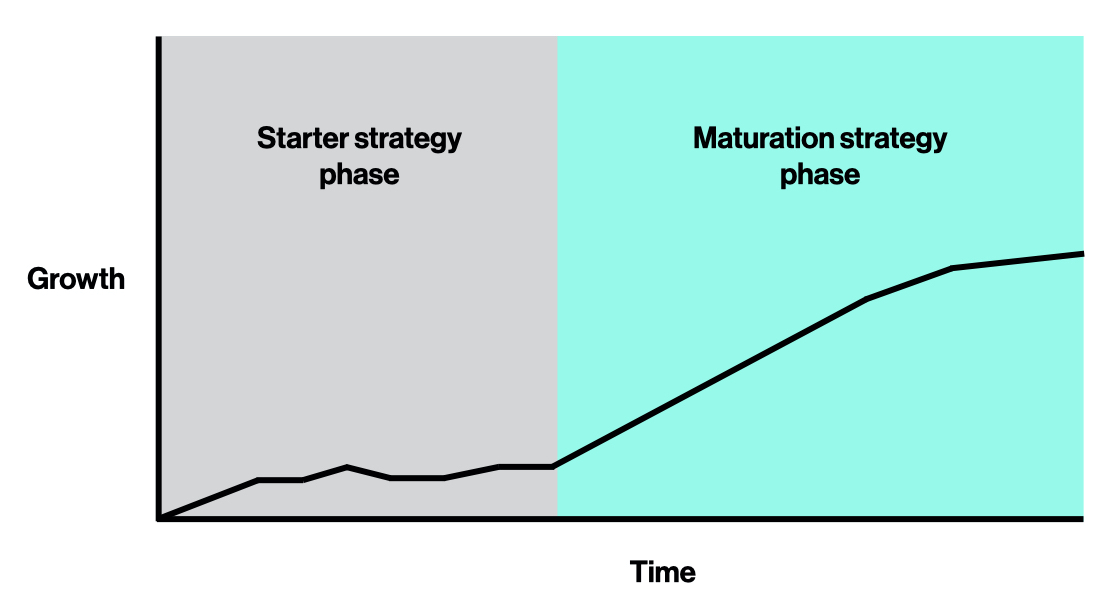 With me so far?

OK.  Now although it’s clear that these two strategies exist in different contexts and for different brands, we still don’t know why that matters.  How is the development of a starter strategy different from a maturation one?

Well it comes down to recognising this simple fact:

Brands seeking maturation strategies know they have something good on their hands.

Brands seeking starter strategies do not.

Every business that has achieved some level of market traction and profitability, even if it’s a complete basket case, knows that it does something of value.  What that is may be a complete mystery, but they know it’s there – the money in the bank proves it.  As such the crux of their strategies (maturation strategies) is figuring out what exactly this is.  Isolating it.  Articulating it.  Amplifying it.  As a result their process largely involves observing themselves, their record in the market, how they’ve grown, and interpreting it strategically.  It’s very much an exercise of self discovery; with the business itself pointing the way.

Conversely brands who haven’t achieved traction don’t have that proof.  In fact they live in fear of possibility that what they’re doing is completely worthless.  You can build a slick expensive business which does nothing of value at all.  (I’d say this applies to many high profile VC-inflated brands attempting to smother their markets, but I digress…) Now the fact the business doesn’t have traction yet doesn’t in any way prove that this is the case (who knows, it could get a random break tomorrow and the growth will begin).  But it’s a risk.  Therefore these business have to be far more speculative in their approach.  They can’t really ask the question “what are we doing right”, because the answer may be “nothing”.  Instead they must ask “what might we be able to do” – and to get the answer to that question they will probably have to look more outside of their business than within.

So as you can see, although the end strategy of both approaches will be similar, the way in which they go about uncovering it will be completely opposed.

We can summarise the differences with the following table:

A further important difference between starter and maturation strategies which it’s important to bear in mind is this:

Because of their speculative nature, it’s pretty unlikely that you’ll nail a starter strategy so perfectly that it will also serve as a maturation strategy too (i.e. be the permanent strategy of the business going forward).  It can happen, but it’s doubtful.  This isn’t necessarily a problem because a flawed strategy can still drive growth.  Indeed all businesses who haven’t yet developed a maturation strategy (i.e. 98% of them) are in some way operating to “half right” strategies such as these.  Strategies that are “wrong” but which still furnish a degree of focus, smart product development, and reasonably effective marketing.

Therefore businesses who develop starter strategies should expect to replace them with maturation strategies at some point in the future.  Only when you’ve proved your worth in the market can you reasonably expect to settle on a direction which is unambiguously “right”.

Speaking for myself, I would estimate that 80% of my projects are maturation strategies.  Naturally these tend to be the businesses with the budgets, but they’re also arguably the ones who can profit more from a “formal” and “tight” direction.  Starter strategies can and should be much looser and more experimental.  Narrow enough to give direction, but not so narrow as to back the brand into a corner, and cut off potentially contradictory growth opportunities.

So wherever you’re at, try to get into the appropriate mindset.

Don’t be an early stage brand which is too internally focused, too “purposeful”, too dogmatic, too sure of itself.  You’ve not earned that right yet.

And equally don’t run a profitable and stable brand in a manner that is too trend focused, too changeable, too impatient, and too influenced by what others are doing.  You’ve got something already you don’t want to lose.