How not to be disrupted

Note: after last week’s discussion and the idea of balancing planned vs. agile strategies, I gave it some more thought and came up with a concept I think explains it well.  So you can consider this a bit of a follow up, hope you enjoy.

Generally speaking, I think the pace of change is wildly exaggerated.

Certainly in business disruption is much less prevalent than its press suggests.  In most markets the dominant brands of 30 years ago are still dominant now.  Predictions and forecasts from 10 years ago have proved laughably untrue.  And although there was an incredible wave of creative destruction that passed through the economy with the adoption of the internet, this wave has largely passed.  Most of the changes that were ripe to happen have happened, and we now find ourselves in a relatively settled period – innovation wise anyway (…).

Nevertheless, whether the pace of change is fast or slow, it remains above all unpredictable.  You never know when it will come for you, your business, your industry, so it’s sensible to be prepared.

This presents a challenge to strategy, since strategy is to an extent a predictive exercise.  We may be inclined to ask:

What is the point of having one if the rug could be pulled from under your feet at any moment?

This question lay at the heart of a public 2018 spat between Warren Buffet and Tesla founder Elon Musk.  Musk claimed, contra Buffet, that any business who tried to “build a moat” (i.e. a sustained position which competitors wouldn’t be able to copy) “will not last long” – and that instead “what matters is the pace of innovation — that is the fundamental determinant of competitiveness”.  In other words his view was that winning businesses are simply those that innovate faster than others, staying ahead of the curve, rather than those who build long term differentiation positions.

This isn’t a new idea.  Rita Gunther McGrath wrote a book about this in 2013 called (appropriately) The End of Competitive Advantage.  Her contention was that any competitive advantage a business might have is always transient – and so by trying to sustain one a business runs the risk of standing still, and being wrong footed by innovation / changes to the market.

(As a side point I think it’s notable that this book was written in 2013, which was probably the absolute peak of internet disruption.  Whether it would have been written 10 years earlier or 10 years later is an interesting one to ponder).

Anyway as you can probably guess from my last newsletter where I questioned the idea of “agility” (at least in terms of executability), I don’t fully agree with these two.

Although there are many examples that prove their points, if you were to adopt their philosophy at face value your business would become like a dog chasing litter blown by the wind: constantly pivoting and being distracted by the latest shiny thing.  Such reactive behaviour is generally ineffective for a couple of reasons:

The answer of course is neither.

This choice, although it seems sensible enough, is actually false.  The truth is that a business can move at multiple speeds at the same time – being both static and innovative.  In fact all the best ones do.  And they do this through a process we might call “multi layered pacing”.

To understand what this is, think first about a business having different “layers” of “big to small”, or “macro to micro”, looking something like this: 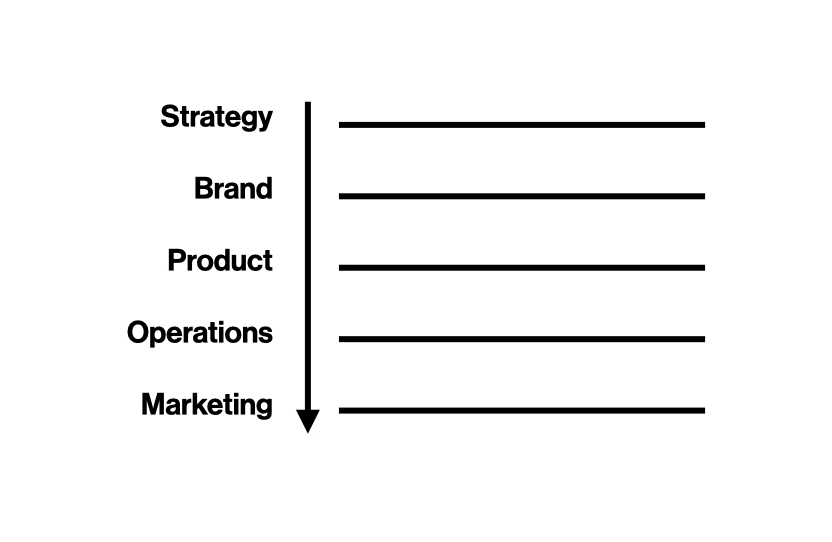 In reality it would be a lot more complex than this, and somewhat variable business to business, but you get the general idea.  At the top you have the big picture long term stuff, which then cascades down to the more bitty, tactical, day to day stuff at the bottom.

Now the idea with multi layer pacing is that the pace of change for each of these layers is different: it speeds up as you go from top to bottom.  Strategy, the top layer, “what the business does in the market”, is almost static – perhaps never changing at all – whilst say day to day marketing, the bottom layer, changes all the time. 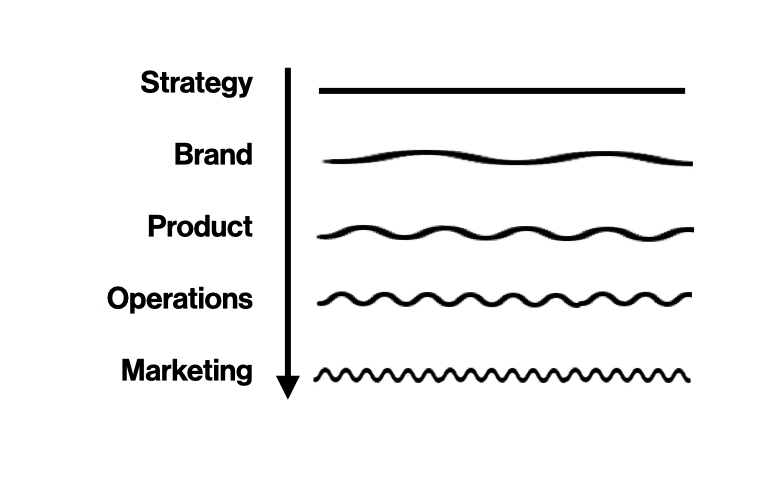 This approach allows for a position of sustained – perhaps permanent – competitive advantage, whilst simultaneously being on top of change and innovation.

The mistake commentators like Musk make (rhetorically, not executionally it must be said), is that they confuse product delivery with strategy.  When he says you have to be quick on innovation he is referring to the “middle layers” of the cascade, the delivery part of the business a couple of clicks below strategy.  This is where most innovation happens.  Changes can (and should) be made here without changing your overall strategy – indeed when done correctly they support its consistency.

To give you an example, imagine if the core strategy of Blockbuster Video had been to offer the maximum choice of movies for people to watch.  I guess it wasn’t, but it’s plausible enough for our purposes here.  In the analogue age this would have meant they needed to focus on things such as 1) volume of titles, 2) number of copies of each title, and 3) ubiquity of stores.  When the internet rolled around however, they would have been presented with a new way of delivering this value.  For them to pivot to an online service when the opportunity arose would have been entirely compatible with their strategy – in fact the strategy would have pretty much demanded it, as an online model would have allowed them to hold more stock.  Consequently such a shift wouldn’t have been a “strategic change” at all.  Not how I see it.  It would have been a product change in order to ensure they continued to own their strategy in the face of competition from the likes of Netflix.

In short the strategy doesn’t move, the product does.

Ironically despite Musk’s claims, this is exactly how Tesla operates.  They may be the quickest movers in the game when it comes to things like battery technology, but at the top layer they are completely static and consistent.  Tesla basically owns the space of making electric cars desirable status symbols (there’s a bit more to it than that, but that’s the gist).  Every innovation they create serves this strategy.  As a result in the consumer’s eyes they have built a extremely powerful, meaningful, and above all consistent brand.  This is not a company that changes with the breeze – the way that some competitors like Mercedes have, eroding their brand.  This is a company that chose a lane way back when they launched the original Roadster, and has stuck to it.

Does this mean they aren’t innovative?  Clearly not.  It’s just they pursue change and innovation at a lower level than the strategic.  They use fast change to bolster a slow strategy – exactly what every company should do.

Ultimately then, there is no decision to be made here.  Every company should have a slow, even static, macro strategy at the very top which defines precisely the offering it’s going to give to its customers; the part of the market it owns utterly and completely.  This defines what the company is.  What its for.  Its immutable characteristics which it wouldn’t really be able to change even if it wanted to.  The business version of “know thyself”.

And then, below it, every company should also have fast paced innovation on a product, operations, and marketing level to support that – changing just as often as is required in order to keep control of the strategic position.  New trends, opportunities, technologies, etc. will always be cropping up.  Your strategy is not determined by them; your strategy determines how you respond to them – in a way that nobody else would.

That way it doesn’t really matter if the world is moving fast or not.  Either way, you’re ready for both.