The cautionary tale of Only Fans, and why it matters to your business Finding Success As A Digital Business Through Proper Positioning

A couple of months back I wrote a piece about the trend of concentration – whereby technology is enabling attention and money to be pooled into fewer people and organisations.

That piece was extremely broad in scope and considered the issue at a societal level, so here I want to take it down a knot and consider the implications for businesses specifically – starting, inevitably, with the sex trade.

A few weeks ago I picked up on a minor Twitter stir prompted by a successful Only Fans performer, Aella.

Surprisingly the controversy wasn’t a result of anything particularly salacious she tweeted, but rather a simple graph. It mapped earnings on the platform to the percentage of creators in each earning bracket, as you can see here: 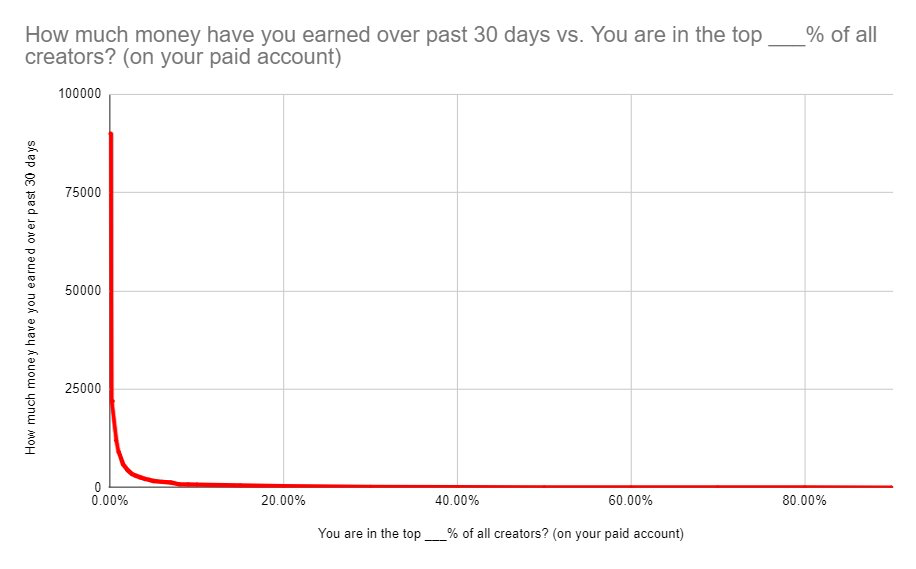 Clearly, the results are pretty stark. Almost all money on the platform is being earned by a tiny fraction of creators, whilst the vast majority are grinding away for nothing at all. We’ve probably all heard of the Pareto Principle of course, whereby in this case you would expect 80% of the earnings to accrue with 20% of the performers, but in actuality, the results turn out to be far more extreme; more like 99% of the earnings with 0.1% of the performers.

So what is going on here?

Well, quite simply, as technology removes geographical and supply barriers to services, consumers are no longer forced to buy from the most accessible seller, but can instead buy from anyone they choose.  As a result, they unsurprisingly congregate around the “best” option (or, perhaps more accurately, the most algorithmically successful one), and thus trade is pooled there.

While this is clearly good news for the winner, it’s clearly bad news for everyone else, as the ability to make a decent living as a “mid-market” supplier vanishes. Before recorded music there used to be a professional violinist in every town, servicing that town’s musical needs. But when people were able to listen on-demand to recordings of the world’s greatest, the market for such performers crumbled. Who wants to listen to that mediocre nobody when we can listen to Yehudi Menuhin whenever we want?

This of course is why parents tend to be a bit sceptical when their child announces a desire to be a professional musician. 150 years ago this was a pretty viable career choice, but now, as they would no doubt say, it’s like winning the lottery.

These days the same thing is happening with Only Fans, and as a result, one would have to be similarly cautious about choosing that “career choice” too.

This then is the true commercial danger of technology.

It is not, as we were always warned, “automation” (although there is a bit of that of course). It is instead severe concentration, the hollowing out of the mid-market, and the contraction of industries and the opportunities within them.

The narrative we’ve all been sold is that the internet has increased business opportunities, and naturally in some cases that is true. However, I would suggest that if we were to look on a more statistical level – in terms of jobs and money – then in aggregate the opposite is the case. The number of opportunities to become successful as a mediocre service provider, business, or employee (i.e. what most people do) is contracting every day.

The relevance of this to our purposes here, I think, is in understanding the dynamics of your own industry, and to what extent this affects you.

Simply put, some industries are pretty immune to these effects, and some are highly vulnerable.

The immune are those industries that either a) cannot be delivered at mass scale by technology or b) in which the consumer demands high diversity. A classic example of this would be restaurants. Not only can you not make a restaurant into a digital product; you also can’t expect people to only eat at one restaurant for the rest of their lives. People like to mix it up, and as a result, such pooling can’t occur.

The vulnerable are naturally those industries that can be delivered at scale by technology, and in which the consumer simply wants to find one or two good options which work for them, and stick with them.

I myself feel a little guilty for recently contributing to this phenomenon in the area of exercise classes – a vulnerable industry category. In looking for online strength, HIIT, and yoga classes I came across the platform Alo Moves – the classes offering of American yoga apparel brand Alo. I’ve got to say it’s great: thousands of classes from world-class instructors, beautifully presented, and for only $20 per month. However, I have chosen this over all the online pandemic offerings of studios local to me; studios with whom I have an offline relationship. Their offerings are clearly less good, so aren’t I just a “consumer exercising free choice”?  Perhaps. But technological dynamics underpinning that choice are, I would say, somewhat complex – making it slightly more dubious than it would normally be.

I would encourage you to think carefully about whether your business is now – or may be in the future – part of such a vulnerable industry. If this is the case, then it’s important you acknowledge it and get on top of it. For example, consider these options if you want to find success as a digital business:

In sum, it increasingly feels like we are heading to a world where there is “one of everything”. One shop, one radio station, one TV channel, one yoga teacher, etc. It reminds me of something I once heard which suggested that the Communist Revolution is occurring, it’s just being driven by capitalism rather than socialism – regardless the end result is pretty much the same.

I don’t know if that’s true at all, but it’s a clever observation nonetheless.  It’s a revolution of some flavour alright, and one in which we are all unwitting revolutionaries.

As consumers, we can embrace it or resist it, but as founders, we have no choice but to adapt to it.

Learn how to think strategically by signing up for my newsletter. It offers loads of insight on how to differentiate yourself in flooded markets. Alternatively, you can download one of my free ebooks that will help enable strategic thinking around your business and offering.